At daybreak, the rising sun sends shimmers across the Mingyong Glacier’s blue tongue of cascading ice that tumbles and melts into Asia’s famous Mekong River far below.

Despite frigid winds and snow, Buddhist travellers assemble beneath streams of colourful Tibetan prayer flags at the tiny border village of Feilai Si to make offerings to ensure safe passage through the Meili Snow Mountains.

As they plunge branches of juniper into the fiery belly of a white stucco chorten, an icy wind carries skywards the mingled scents of pine and ash, much to the delight of the tourists who overnight here to catch the stunning sunrise views.

From here, the treacherous journey through the Meili Snow Mountains leads travellers into the Chinese-controlled Tibetan Autonomous Region and on to Lhasa.

The good news for foreigners without Tibetan visas and the required entourage of guides is that despite the border demarcations, a truly Tibetan land flourishes throughout the villages of the Meili Snow Mountains and in the region’s largest town, Shangri-La (formerly Zhongdian).

In Shangri-La’s cobble-stoned old town, Tibetan, Naxi and Bai cultures colourfully cohabit, and join together in the square for spontaneous nighttime dancing.

Standing guard over the town, Ganden Sumtseling Gompa – the most important and resplendent Buddhist monastery in China’s southwest – is home to 600 monks.

If you see nothing else, this 300-year-old monastery complex (also known as Songzanling Monastery) is undoubtedly worth the trip to Shangri-La and is open to foreign visitors year-round for a tiny entry fee.

In Shangri-La, Tibetan language dominates conversations on the streets and chunky yak butter tea is served up for breakfast with steamed, flat baba breads and fresh honey, replacing the noodle soup and dumplings offered elsewhere in China.

To avoid the unpleasantness of arduous Chinese bus travel, most travellers fly into Shangri-La (there is no rail link), but must continue on to the Meili Snow Mountains by road, enduring a hazardous, high-altitude bus trip.

Thankfully, the Meili Snow Mountains reward generously, drawing visitors with a mythical horizon of summits and seracs that you can enjoy from a rooftop bar after an adventurous day spent hiking, sipping a glass of locally made red wine as the sun goes down.

Try and track down a bottle from the old French vineyards at nearby Cizhong where, in the 1860’s, Catholic French missionaries ambitiously built a church and planted vines.

In Feilai Si, a comfortable double room with a mountain view costs around 120 yuan, and nearby cafes cater remarkably well to Western tastebuds.

While it requires a bit of travel time, a stay in Shangri-La teamed with a mountain escape to the Meili Snow Mountains offers the chance to immerse yourself in Tibetan culture without the costly permits and inflexible itineraries required on the other side of the mountains.

A single entry 30-day Chinese tourist visa costs AUD$109.50 for Australians and up to $218.50 for US citizens, and must be obtained in advance (see au.china-embassy.org/eng). ATMs are widely available throughout Southwest China. Visit: March to October. 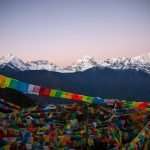